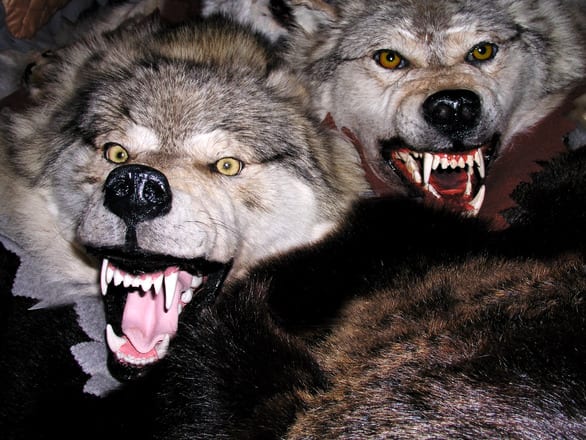 Derrick looked on as the beast staggered towards him with blood red eyes. This was the beast that was blocking Derrick’s journey into the vast, beautiful World of the Unknown. Normally afraid, today was different as he felt a strange sense of courage normally foreign to him. He needed to get past the beast and into the World of the Unknown at all costs. In that moment he knew, it was now or never. The beast or him. Brandishing his trusty dagger, Derrick ran at the beast full force with nothing held back.

The beast let out a roar and charged at Derrick with what looked like smoke puffing out of its nostrils. The two were nearly face-to-face when the beast suddenly stopped in its tracks as a look of fear flashed across its face. The beast quickly spun around and ran the other way as fast as it could.

Dismayed, Derrick skidded to a halt, looking on in disbelief as the beast scampered the opposite direction.

“What’s wrong, I thought you wanted a fight?” Derrick yelled as the beast ran the other way. Upon hearing this, the beast quickly stopped several yards away from Derrick and swung its long, scaly neck around to face him.

“A fight? Against you?” the beast scoffed, “I wouldn’t stand a chance against you!”

Derrick couldn’t believe what he was hearing. The beast was several feet taller than he was, had sharp claws, tough, scaly skin, and teeth that looked ten times sharper than his dagger. A creature like that shouldn’t fear anything. Derrick began to wonder if the beast was merely taunting him.

“I get it…you’re just playing with me, aren’t you? Do you really think I’m that stupid? Look at you! Your sharp claws and teeth, your tough skin and large frame! I know I’m probably going to lose to you, but I’d rather die in battle than lie down and let you have me without a fight!” Derrick shouted as he pointed his dagger at the beast.

“You really don’t get it, do you?” the beast sighed, “You’ve already beaten me.”

Derrick squinted his eyes to get a better glimpse of the beast standing a few yards in front of him. Strangely enough, the beast’s previously large frame was suddenly a lot smaller than it was before, what was once a towering creature now looked more like a small house cat. Its skin was now more akin to soft, delicate fabric than the tough, impenetrable armor originally covering the beast before. Even its sharp claws and teeth were now much less intimidating and almost laughable. This was not the beast he had been terrified of his entire life.

“But…but I don’t understand,” Derrick said, confused, “Just a minute ago you were twice my size and had sharp teeth but now…now you’re nothing.”

“You see me for what I truly am, Derrick,” the beast said, “I am nothing. You spent your entire life avoiding me, worrying about me, changing yourself because of me, losing sleep because of me, not doing what you love because of me, hating yourself and others because of me…now do you see how ridiculous and irrational your fears were? Why have you made me out to be this terrible monster?”

Derrick, still in shock over this daunting revelation, sunk to his knees as he tried to process everything that the beast was telling him. Could it be that his fears were the whole time irrational? Was this beast really just…nothing? Had his imagination made this creature into something much more diabolical than it really was?

“This whole time…I was so afraid to face you and explore the World of the Unknown because I didn’t think I could defeat you. I had to hide from you…and yet, you were nothing more than a tiny, weak and pathetic creature that I could have crushed without any problem…” Derrick said as his anger increased with each word spoken.

Derrick picked himself up off the ground, ran toward the beast and placed his dagger at the beast’s throat.

“Before I do this, tell me…what are you?” Derrick asked the beast as it lie helplessly under Derrick’s blade.

The beast looked up at Derrick as its body began to wither.

“…you’re nothing,” Derrick said under his breath.

“The only one that kept you from exploring the World of the Unknown for all these years was you, not me,” the beast said as it drew its final gasp of air.

Derrick laid his dagger down on the spot where the beast had died. He no longer needed to fight, he knew he had won. Running full speed ahead, Derrick’s mind was now free to explore, create and innovate without fear that the beast of his past would rear its ugly head again.

And even if it did show up, he reasoned, he knew exactly what the beast was:

And nothing would ever keep him from his destiny again.